By Harry Wise For This Is Money

Hungarian airline Wizz Air flew about 100,000 more passengers in June than Ryanair, though both airlines have seen customer numbers fall off a cliff since last summer.

Just over half a million people travelled on a Wizz Air flight last month compared to around 400,000 who flew on a Ryanair plane.

The figures were a massive improvement on the previous month when the airline industry was brought to a virtual standstill by heavy travel restrictions imposed by governments across Europe and the wider world. 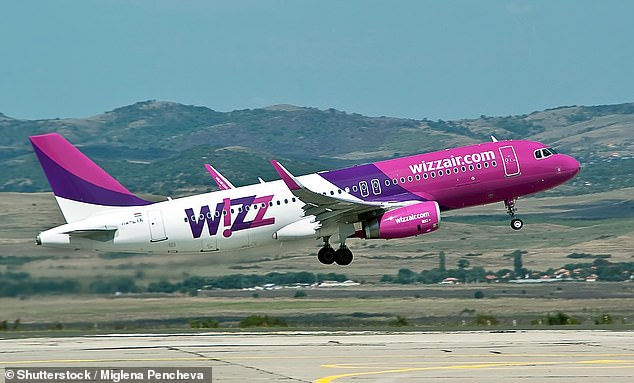 Wizz Air’s growing operations were enhanced by the launch of 64 new routes, and the opening of three new bases across Europe, which were in Dortmund, Germany, St Petersburg, Russia, and the Romanian city of Bacau.

Its total passenger figures were still 86.1 per cent below their levels in 2019 though, while its seat capacity fell by three-quarters on an annual basis.

Ryanair’s traveller levels sank at an even faster rate, however, dropping by 99 per cent from 14.2 million the year before. The group flew just 2,800 scheduled flights in June, and none were with its subsidiary airline Lauda, whose fleet was wholly grounded.

The poor results come the day after pilots at the Irish company agreed to have their wages cut by 20 per cent in order to save 260 jobs from being lost after months of falling demand for flights.

The British Airline Pilots’ Association (BALPA), the trade union representing UK pilots, said 96 per cent of its Ryanair-employed members agreed to the deal’s terms, which will also see the pay cuts restored to their full amount over the coming four years. 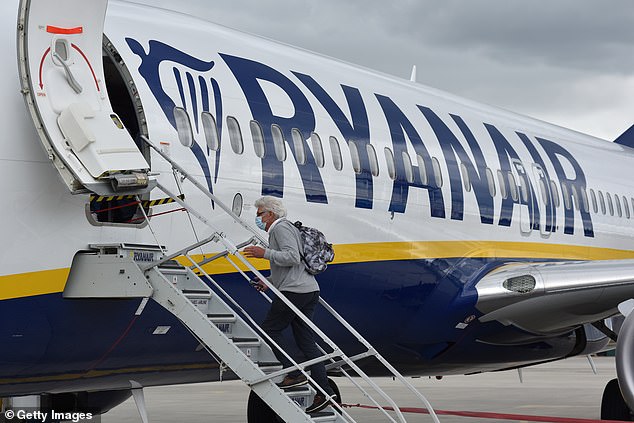 Ryanair Group flew just 2,800 scheduled flights in June and had only 400,000 passengers

BALPA General Secretary Brian Strutton said it was a ‘terrible time for aviation and for employees in all airlines,’ and that his organisation did ‘not relish accepting pay cuts,’ which would impact many of their union’s members.

‘But,’ he added, ‘we are at least pleased to have ensured that the overwhelming number of pilots whose jobs were at risk will continue to be employed.’

Wizz Air announced it was cutting around a fifth of all its positions back in mid-April and slashing the pay of its workers, including pilots and crew, due to the collapse in European air travel.

Its finances remain relatively strong though and in the year to the end of March, it underlying profits jumped by a sixth to £307million thanks to carrying around 40 million passengers, nearly 16 per cent more than the preceding year.

The airline boasts of having ‘the lowest CO2 emissions per passenger/km amongst all competitor airlines’ at 57.9 in the year to the end of June.

Even so, Wizz’s per passenger emissions were nearly two-thirds greater last month due to the massive fall in load factor, which was only slightly above 50 per cent.

Shares in Wizz Air were down a third of a per cent to 3,331p around mid-afternoon.

Covid crisis stops many young workers from saving into pensions

Investors should note that Japan is dismantling some old defences

S&P 500 Climbs but Closes Below a Record