As part of its takeover of Virtual Design Festival today, ArkDes is giving Dezeen readers a guided video tour of its current exhibition exploring the phenomenon of ASMR. Tune in from 3:00pm UK time.

Hosted by its curator of contemporary architecture and design James Taylor-Foster and digital communications manager Justina Hüll, the video guides you through the first ever museum exhibition exploring Autonomous Sensory Meridian Response, also known as ASMR.

The term refers to physical sensations of euphoria or calm in response to visual, sensory and auditory stimulus, which in the last decade has become an online sensation, with ASMR creatives producing innovative and creative ways to trigger it.

Titled Weird Sensation Feels Good, the exhibition brings together the work of many “ASMRtists” as well as examples of “unintentional ASMR” such as a video from the 1990s of Icelandic musician Björk examining the insides of a television and the video tutorials of American painter Bob Ross. 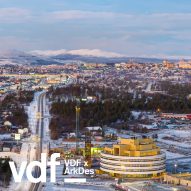 “Like meditation or yoga, ASMR happens to both your body and to your mind,” ArkDes stated. “It is not about speed, but about focus and slowness. ASMRtists do not seek to entertain but to relax; for experiencers, it offers a degree of insulation from a noisy, wandering world.”

The exhibition explores the phenomenon as a form of design in itself but also highlights its suggested psychological benefits.

“As a form of digital intimacy, it [ASMR] offers comfort on demand, standing against the feeling of isolation that constant connectivity can deceptively breed,” ArkDes explained.

“Anecdotally, ASMR is being used as a form of self-medication against the effects of loneliness, insomnia, stress, and anxiety.”

The video is being shown as part of ArkDes’ takeover of Virtual Design Festival today, which features a virtual exhibition opening of its new Kiruna Forever exhibition and a live interview with its director Kieran Long.

Presenting (in order of appearance):

ArkDes, Sweden’s national centre for architecture and design, is a museum, a study centre and an arena for debate and discussion about the future of architecture, design and citizenship.

Its aim is to increase knowledge and cultivate debate around how architectu and design affect our lives as citizens, and to influence this change through debate, exhibitions, campaigns and research relating to Swedish and international architecture and design.

Virtual Design Festival runs from 15 April to 30 June 2020. It brings the architecture and design world together to celebrate the culture and commerce of our industry, and explore how it can adapt and respond to extraordinary circumstances.

To find out what’s coming up at VDF, check out the schedule. For more information or to join the mailing list, email vdf@dezeen.com.

Partnership content with ArkDes. Images are by Johan Dehlin.

Avoid These 5 Mistakes When Asking Clients For Their Feedback

The Text Block as Building Block with Angie Wang