By Ian Randall For Mailonline

The ‘dull, dirty and dangerous jobs’ could be automated, but we would need to add many new functionalities to machines first, roboticists argued in a journal editorial.

Many of these necessary capabilities, however, are neither being funded or developed at present, the experts cautioned.

Scroll down for video

Robots could be trained to disinfect surfaces, take temperatures, collecting swabs and provide social support for quarantined patients to help combat coronavirus. Pictured, a robot build at the Tsinghua University in Beijing that has been designed to help medical workers treat coronavirus patients remotely

Among the signatories of the editorial are roboticist Howie Choset of the Carnegie Mellon University in Pittsburgh and the president of the National Academy of Science, Marcia McNutt.

‘The experiences with the (2015) Ebola outbreak identified a broad spectrum of use cases [for robots],’ the team wrote.

Many of these applications would serve to help reduce the risk of humans being directly exposed to disease.

‘But funding for multidisciplinary research in partnership with agencies and industry to meet these use cases remains expensive, rare and directed to other applications.’

‘Without a sustainable approach to research, history will repeat itself, and robots will not be ready for the next incident.’

According to Professor Choset, the authors did not intend to argue exactly how robots might be used in the event of a pandemic.

‘Rather, we hope to inspire others in the community to conceive of solutions to what is a very complicated problem,’ he explained. 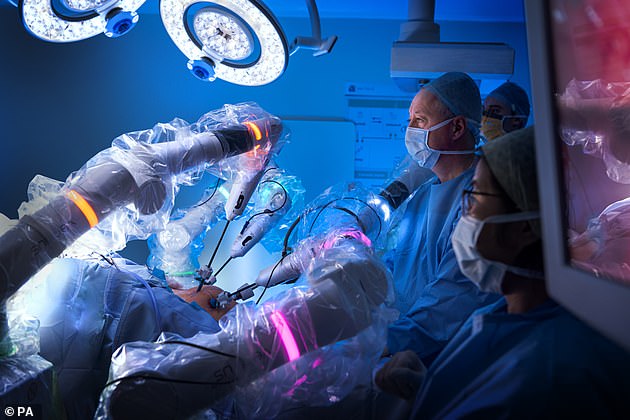 The ‘dull, dirty and dangerous jobs’ could be automated, but we would need to add many new functionalities to machines first, roboticists argued in a journal editorial. Pictured, robots are already being applied to routine medical treatments — like this one at the Milton Keynes University Hospital NHS Trust in Buckinghamshire, which can aid in keyhole surgery

In addition, Professor Choset added, artificial intelligence might similarly be applied to assist in future responses to large-scale disease outbreaks.

At Professor Choset’s home institution of Carnegie Mellon, for example, researchers are exploring how AI-powered drones might play a role in providing humanitarian aid and helping respond to disasters.

The full text of the editorial was published in the journal Science Robotics.

COULD THIS TINY ROBOT SOME DAY BE USED TO DELIVER DRUGS INSIDE OUR BODIES?

Scientists at Germany’s Max Planck Institute for Intelligent Systems have developed a tiny robot that might be able to be used for medicinal purposes.

The robot is about a seventh of an inch long, making it smaller than a penny.

Called a ‘millirobot,’ it can walk, crawl and jump on land, as well as swim in water.

Scientists modeled it after creatures like jellyfish, caterpillars and larva

Without any legs, the robot is made of a soft, pliable rubber that’s embedded with magnets

The robot is controlled using a magnetic field

It may also be used to improve minimally invasive surgical procedures

Supermassive black holes: How did they grow so fast? – The Next Web

When will a coronavirus vaccine be ready? – The Guardian

What’s the Best Material for a Mask? – The New York Times

Trust is essential in these times. But Boris Johnson is not a man to be trusted

Opinion | How China’s fake news machine is rewriting the history of Covid-19, even as the pandemic unfolds – POLITICO

Supermoon 2020: Look out for April's Pink Supermoon next week – All you need to know

After the Cares Act, Hospitals and Businesses Need Sustained Support