By Tom Witherow For The Daily Mail

The bosses of two of Britain’s biggest gambling companies have refused to take pay cuts despite using taxpayer money to prop up their businesses.

William Hill is benefiting to the tune of over £30m per month from the wage subsidy scheme and the business rates holiday, while Paddy Power is saving £400,000 per month in business rates.

The companies’ bosses have been slammed for failing to follow the lead of rivals by taking pay cuts, as a way of sharing the pain caused by the coronavirus pandemic with taxpayers and low-paid staff. 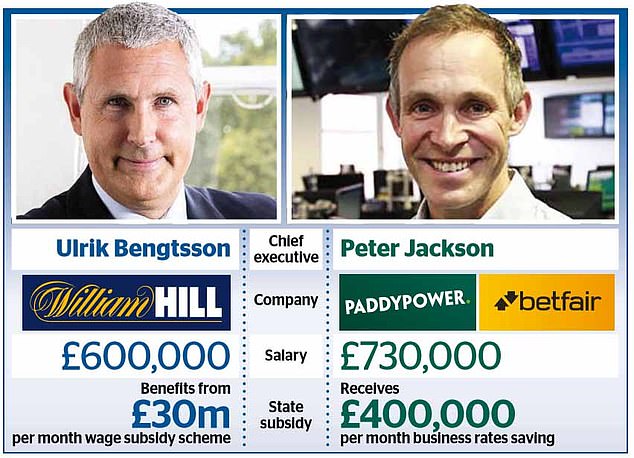 Ladbrokes’ boss, Kenny Alexander, has broken ranks by cutting his full £816,000 salary by 20 per cent for three months and ditched his 2020 bonuses, after this newspaper reported his company was benefiting from £20m of taxpayer support per month.

But Ulrik Bengtsson, the boss of William Hill, will keep his full £600,000 salary this year, and has instead only offered to cancel a planned pay rise and his annual bonuses.

His firm is using the wage subsidy scheme to pay the majority of the 8,000 staff who are staying at home from its 1,568 shuttered shops.

Peter Jackson, the boss of Paddy Power’s owner Flutter, will also keep his £737,000 salary despite his company benefiting to the tune of £400,000 per month from the business rates holiday.

The 44-year-old was, however, praised for choosing to pay staff in its 350 UK shops who are not working, despite his firm being eligible for the furlough scheme.

The wage subsidy scheme allows businesses to claim 80 per cent of their workers’ salaries, up to a maximum of £2,500 per month, if they are not working.

This week MPs said their failure to take a pay cut while accepting taxpayer handouts was ‘shameful’.

Shadow Treasury Minister Wes Streeting MP said: ‘It’s really important that high-paid bosses are leading by example, and where they are asking the workforce to take a hit that this pain is being felt by everyone.

‘The schemes need to be used responsibly. At some point we are all going to have to face up to the cost of these extraordinary and necessary measures.

‘It will sit in the throat if high paid executives aren’t taking any of the pain at all whilst the workforce are put into furlough.’

Bosses at Betfred and casino group Rank have taken pay cuts after furloughing staff, whereas online operators Bet365, Betway and 888 have not needed to use Government support.

Bosses at Skybet have taken a pay cut despite not using the help.

William Hill said ‘along with other retailers’ it is ‘grateful’ for the Government support for jobs.

dLocal’s post-IPO lockup set to expire, challenging a fintech that’s off 54% since Sept. 1

Market Analysts Explain Why This Correction Is Good For Bitcoin

Bitcoin And Satoshi’s Seed: From Descartes To Quantum Play

Market Analysts Explain Why This Correction Is Good For Bitcoin