Wearable devices can be stuck onto the stick like plasters, using a new method pioneered by researchers at Carnegie Mellon University.

A combined effort from engineers at the school’s Soft Machines Lab and Morphing Matter Lab, ElectroDermis is a new way to apply electronics to the skin, whether it be for medical, fitness or lifestyle purposes.

Where current wearable technology is rigid and either worn like a watch or implanted for more permanent monitoring, ElectroDermis represents a new wave of advances in electronic skin patches that are stretchy and conform to the body.

“We envision a future where electronics can be temporarily attached to the body, but in functional and aesthetically pleasing ways,” wrote the researchers in a paper for the CHI Conference on Human Factors in Computing Systems in Glasgow, Scotland in May.

The challenge for ElectroDermis and similar projects has been to make the electronic components flexible.

For instance, University of Tokyo’s engineers created a sensor in the form of a temporary tattoo that can be comfortably worn for up to a week.

But Carnegie Mellon’s group, led by Eric Markvicka and Guanyun Wang, wanted to make a more complicated device, involving not just a single sensor but components for signal processing, wireless communication and power. 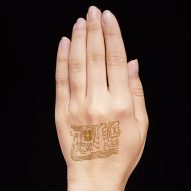 To achieve this, they used rigid electronic chips that are fixed at key points on the body but joined by flexible copper electrical wiring to make circuits.

They fabricated the wiring from copper sheets cut in a wavy, serpentine shape to enable them to bend. A video for a knee patch, for instance, shows ElectroDermis stretching easily around the joint as it moves.

The soft circuits are sandwiched between a Spandex-blend fabric and a medical-grade adhesive film to stick them to the body.

They are also highly customisable, thanks to specially developed software, and reusable, because the adhesive layer can be replaced.

ElectroDermis patches take less than an hour to make and last on the body for hours or days.

The Morphing Matter Lab has previously produced 4D-printed plastic objects that fold themselves into predetermined shapes when heated — a technology they believe could be scaled up to create flat-pack furniture.

Landsec swings to profit on record leasing in London

To make Australia's housing affordable, more needs to be done on the supply side: Property data firm

Landsec swings to profit on record leasing in London

To make Australia's housing affordable, more needs to be done on the supply side: Property data firm