At least 140 American children died as a result of police-involved incidents between 2003 and 2018, a grim new study shows.

And much like the adult world, it’s much more common for black or Hispanic children to be die due to police force than it is for cops to kill white children, according to Children’s National Hospital.

A black child or adolescent is six times more likely to die at the hands of police than their white peers, and Hispanic kids face three-fold higher risks. Boys, too, are far more at-risk of dying due to ‘police intervention,’ than are girls, the study found.

It comes after the summer’s widespread Black Lives Matter protests over the death of George Floyd, was killed when a Minneapolis police restrained him by pressing his knee onto the 36-year-old’s neck. 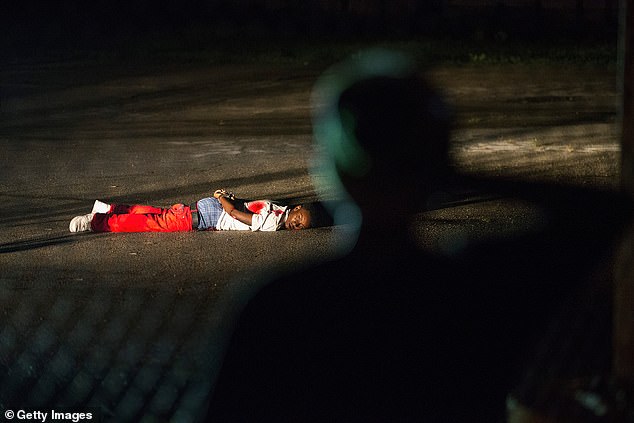 Black children are most at-risk of being shot and killed by police, accounting for six-times more of the 140 cop-involved fatalities compared to their white peers. Pictured: a young boy lies handcuffed after he was shot by police in Ferguson, Missouri, during protests on the one-year anniversary of the shooting of Michael Brown

In 2014, Tamir Rice was fatally shot and killed by Timothy Loehmann in Cleveland, Ohio.

Rice was 12, black and holding a plastic toy gun. Loehmann was white, 26 and a police officer.

He was the latest of several black males shot by police officers, but Rice’s death set off nationwide outrage because he was innocent, unarmed and so very young.

His name remains a rallying cry in protests, but he’s far from the only child killed in police-involved incidents in the US.

Between 2003 and 2018, a 16-year period, 140 children died from police intervention, the new study, published in the journal Pediatrics, found by reviewing death certificate and census data.

The vast majority – 113 – of those deaths involved guns.

And 93 percent of the children killed were boys.

Each year, nearly 1,300 children are killed by guns, according to historical data tracked by Nationwide Children’s.

Most of these deaths are also among boys. They’re most commonly killed by a sibling or other relative, playing with or otherwise unsafely handling a gun. 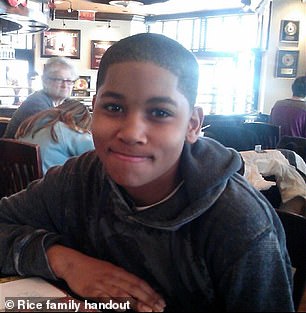 Police are called to respond to dangerous situations like these, with the intent of preventing a violent crime from occuring, or assisting in an accident.

And yet, 140 children between ages 12 and 17 have ultimately been killed when police have arrived on the scene, and the risk is far greater if they are not white.

‘Any death of a child is devastating but when it is due to police violence, it leads to distrust in the system and undermines the primary mission to protect,’ said lead  study author Dr Monika Goyal.

‘The pattern of stark racial and ethnic disparities only adds to this tragedy, further oppressing and alienating communities of color. It’s important to investigate, identify and correct those policies and personnel that perpetuate and exacerbate these disparities.’

Among the potential reforms put forth amid this year’s nationwide struggle to address the disproportionate number of minority people killed by police in the U.S., some activists have suggested that first responders to many emergencies be unarmed social workers or mental health professionals, rather than gun-carrying police officers.

Still others have suggested that communities be policed by their own members, who are familiar with the people they serve, and reflect the racial and ethnic demographics of those communities.

Although the number of children who died in police-involved incidents during the years of the study is relatively small, the threat of guns in any hands is significant to children.

Firearm injuries have accounted for 60 percent of all U.S. children and adolescents – outpacing car accidents. Many of these deaths are suicides, but the new study shows that it’s not just kids who pose a danger to themselves.

‘As the country works to reform policing practices and strives to mitigate disparities in our justice system, it is essential we do not forget the disproportionate impact on children of color,’ Dr Goyal says.

‘Our study confirms these disparities that are stark and unacceptable.’

Vitamin B12 deficiency symptoms: Feeling your own heartbeat may be a sign

How to live longer: How drinking apple cider vinegar could increase your life expectancy

'The air reeks of invisible danger': an extract from Breathtaking: Inside the NHS in a Time of Pandemic

Covid symptoms: How to reveal your risk of Covid by simply touching your skin

How can I get over my needle phobia?

DR ELLIE CANNON: What it's like helping Britain to jab its way to freedom

'I couldn't breathe': The 26-year-old with Covid

Frustrated With A Dominator On Your Video Calls? Try This Simple Technique

Vitamin B12 deficiency symptoms: Feeling your own heartbeat may be a sign